Another interview with Sharon at the beginning of her career & more

It's difficult to imagine Sharon Tate as having ever been shy.

Wearing an abbreviated miniskirt, she seems to enjoy the commotion she causes wherever she goes. Sharon also affects thick, black, false eyelashes, brown eye shadow around her lips, and long ash-blonde hair that falls freely about her shoulders. Her presence in a crowd is as insignificant as a floodlight in a blackout.

Yet just three years ago, Sharon was a "painfully shy girl of 20 with blonde pigtails," according to her own recollection. The Dallas-born youngster had never acted or had a smidgen of dramatic training. But that didn't faze Filmway's top executive, Martin Ransohoff. When he first glimpsed her in the reception room of his office, Ransohoff ordered that she be singed to a seven-year contract.

Today, Sharon Tate is an actress. Some even label her a star though she has yet to be seen in a movie. Her first two MGM films--"13" and "The Vampire Killers"--won't be released for at least two months, and Sharon's latest movie "Don't Make Waves," isn't scheduled for screening until next summer.

And so no one really knows whether Ransohoff's gamble to make an instant star with his crash program technique has succeeded. Sharon, naturally, is convinced that she has made the show business grade. "I'm sure the three years I spent in training to be an actress will pay off," she says. 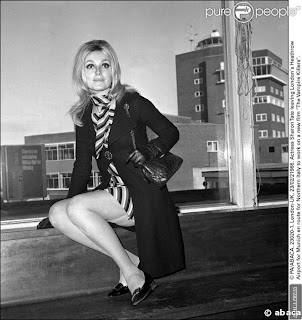 The training consisted of intensive schooling (10 hours a day, five days a week) in dramatics, singing, dancing, body building, walking, talking--everything except breathing. Sharon soon began to lose her shyness and gain a sense of permanency in her surroundings.

Up to then, Sharon had led a tumbleweed type of existence. As an Army 'brat' (her father is Maj. Paul James Tate), she spent a great deal of her childhood packing and moving from one military base to another. Before Sharon was 15, she had lived in Tacoma, Houston, El Paso and San Francisco--just to name a few cities. When Maj. Tate was shipped overseas in 1959, he took his wife and Sharon with him. As a result, Sharon boasts a fluency in Italian and a diploma from a Vicenza, Italy, high school.

It was in Italy, too, that she met actor Richard Beymer, who was on location for the film, "The Adventures of a Young Man." Beymer gave her the old line that "she ought to be in pictures"--only he meant it. Sharon scoffed at the notion, but then came around to the idea when the actor introduced her to his agent.

On Sharon's return to this country, she tried out for a TV cigarette commercial at the agent's urging. She landed the job despite the fact that she had never smoked before. (Today, she goes through half a pack a day.) "The commercial required many takes," Sharon recalls. "Just when they were ready for the final one, I passed out from taking too many puffs on my first attempt at smoking."

Sharon was still a bit dazed at the enormity of breaking into show business when she stepped into Ransohoff's Filmways office. Ransohoff felt instinctively that she had movie star potential. However, it was only after she had several months of acting lessons that he placed her in CBS-TV's "Beverly Hillbillies". Sharon portrayed Janet Trego on the series, but wasn't given any TV credit. Ransohoff wanted to spring her on movie audiences as a "surprise."

Now that Sharon is an actress in the technical sense of the word, anyhow, she has set her goal on becoming "a light comedienne in the Carol Lombard style." But the 5'5 1/2, 117 pound newcomer does not care to hear that she resembles the late actress. "I don't think I look a bit like her," Sharon pouts. "It's not that I think I'm a sexpot, either. I don't have voluptuous hips and I'm not heavy-chested."

For the time being, Sharon isn't giving movies a thought. She left recently for London to continue her romance with Poland's famed, shaggy-haired director, Roman Polanski. "I've known him for nine months," says Sharon. "We have a wonderful relationship. I don't know if I'll marry him. He hasn't asked me yet." If Sharon does wed, her film career and Ransohoff's half a million dollar investment in her will go down the drain. "I'll give up acting the second I'm married," says Sharon, which leads many observers to believe it won't happen for some time.

Most actresses would rather shed a husband than a career, but Sharon is an unusual girl. What actress, for example, would go out her way to point up the scars on her face? Sharon has a noticeable diagonal scar under her left eye. She also has a small one to the side of the left eye, and another one--"caused by chicken pox"--on her forehead.

"I suffered the big scar," says Sharon, "when I fell on a piece of corrugated tin when I was five. I wouldn't dream of having the scar removed. I am very proud of it. It's me."

There are two movies that have been filmed on location in Italy that are coming out soon.  I mention this because Sharon graduated High School there and some of the locations may very well be places that she saw and visited when she was there.

1)  Is a movie called "Letters to Juliet".  An American girl on vacation in Italy finds an unanswered "letter to Juliet" -- one of thousands of missives left at the fictional lover's Verona courtyard, which are typically answered by a the "secretaries of Juliet" -- and she goes on a quest to find the lovers referenced in the letter.  It stars Vanessa Redgrave and Amanda Seyfried.

2)  Is a movie called "When In Rome".  Beth is a young, ambitious New Yorker who is completely unlucky in love. However, on a whirlwind trip to Rome, she impulsively steals some coins from a reputed fountain of love, and is then aggressively pursued by a band of suitors.  It stars Kristen Bell and Josh Duhamel.

Both will be released next year.

Tomorrow another special issue of Photo Comparison of the Week.
Posted by LovinSharonTate at 9:58 PM